With the rapid advances of AI, concerns around the undesirable and unpredictable impact that AI may have on society are mounting. In response to such concerns, leading AI thinkers and practitioners have started drafting principles and guidelines to envision an AI that would benefit humanity instead of causing harm. Underpinning these principles is the perceived importance for AI to be aligned to human values and promote the ‘common good’. We argue that efforts from leading AI thinkers and practitioners must be supported by constructive critique, dialogue and informed scrutiny from different constituencies asking questions such as: what and whose values? What does ‘common good’ mean, and to whom?

The aim of this workshop is to take a deep dive into human values, examine how they work, and what structures they may exhibit. Specifically, our twofold objective is to capture the diversity of meanings for each value and their interrelationships in the context of AI. We will do so by using some of the tools and techniques developed as part of the Values in Computing (ViC) research. 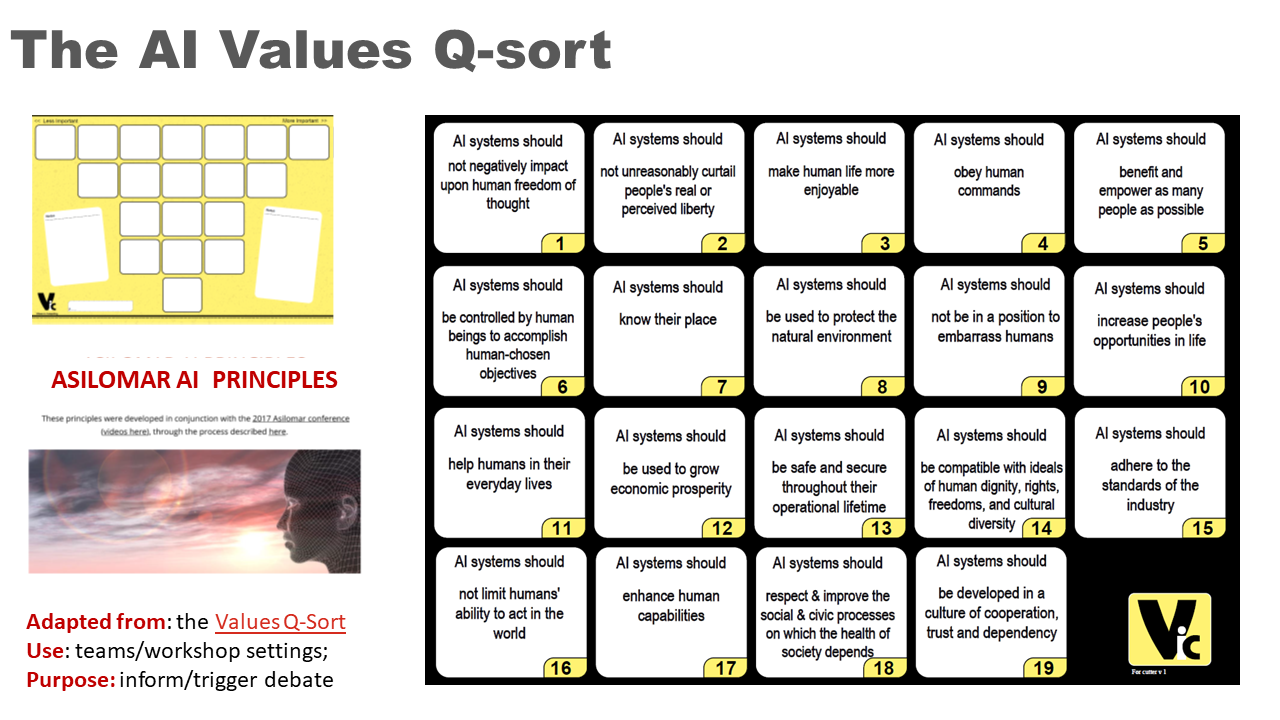 The ViC team has been invited to deliver a workshop on Human Values & AI  at CIRN, Prato, Italy, October 2018.

This workshop  takes a deep dive into human values, examines how they work, and what structures they may exhibit. It uses some of the new tools developed for the AI & Ethics seminar series just held at Alpbach and covers some of the questions explored in our previous post on AI & Ethics.

AI has seen a massive and rapid development in the past twenty years. With such accelerating advances, concerns around the undesirable and unpredictable impact that AI may have on society are mounting. In response to such concerns, leading AI thinkers and practitioners have drafted a set of principles – the Asilomar AI Principles – for Beneficial AI, one that would benefit humanity instead of causing it harm.

END_OF_DOCUMENT_TOKEN_TO_BE_REPLACED

This post was drafted  in response to journalists’ questions  (e.g. from Wiener Zeitung  and Forbes)  in occasion of a week-long AI & Ethics  seminar and of the  ‘State of AI’ panel discussion i was invited to. Shame they asked me before James Mickens gave his phenomenal Usenix2018 keynote on ML, IoT et al. . I would have simply directed them to it.

CLARIFICATIONS: What is AI?

In the last 20 years, this field of study has been focused on the “construction of intelligent agents — systems that perceive and act in some environment. In this context, the criterion for intelligence is related to statistical and economic notions of rationality —  the ability to make good decisions, plans, or inferences” (AI open letter  2015).

The combination of access to big data, increasing computing process power, and market promises has vastly accelerated AI development in the last two decades. The  ‘criterion for intelligence’  is here linked to rational thinking as defined by statistics and economics – e.g. in terms of utility, and performance.

This means that, once humans have designed the problem space in which machine intelligence operates, this will act rationally. Rationally does not necessarily mean fairly and considerately.

To better answer the   questions,  I have made the distinction  between ‘Intelligent agents type A’ and ‘Intelligent agents type B’, this distinction is fictional, and broadly overlaps with the distinction between ‘narrow’ and ‘general AI’ ,  but I prefer it to this latter since it operates at a higher level of abstraction.  Put it simply,  it focuses  on what is available now and what we do not have yet**, but may have in the future.

I would argue that there is a lot of hype and mystique around this AI type B, and this blurs the boundaries between what is worth pursuing in machine intelligence development from what is not. I don’t say that is not possible to build such intelligence, likely to be a very Artificial one indeed, but I question the values underpinning such desire.

Ultimately,  I find the current attitude towards “AI type B” somewhat at odds with the  notion of ‘science’, particularly of the scientific doubt: we do not fully understand what being human means nor what intelligence is. Going beyond both feels like a weird leap of faith. Faith in what and for what, i am not entirely sure.

The journalists’ questions were many and complex. I thought it best to reason about them with ‘team ViC’. Below are my personal reflections, informed by team discussions. As an experiment, each of us also gave “one-word” answer to each of your questions. I have summarized them at the start in italic.

Given our Human Rights track record, we should not build  ‘type B’ machines that need to be granted rights until the rights of every single human being is respected. Also granting an ‘electronic person’ status to a machine, may be just another way for lifting tech industry from their responsibilities.

The Universal Declaration of Human Rights (UDRH) is a testament to both human ‘kindness’ and to our struggle to honor our very own rights.  We, as human species, are currently in breach of every single UDRH article. Furthermore, old problems not only seems to stay, but they seem to morph  and grow in scale, for example:

How can we be capable of respecting entities that are not ‘us’ when we are not good at respecting our own rights? Or, in reverse, are we sure that we can build machines that will respect humans? Some may dream up of Sophia, but it is Mary Shelley who seems to be currently stealing the  show.

Many top AI researchers argue that we should not grant machines the status of an electronic person – to make machines responsible of their actions (good or bad) would mean that their designers and manufacturers could be lifted from their responsibilities. What would you do if a machine does something wrong? Fine it? Put it into jail?

Q2: Who has to be protected from whom?

Q3: What importance do programmers have in the future?

Much and Hardly Any

Perhaps too much focus is placed on  individual developers’ responsibilities, whereas these responsibilities are often distributed.  More emphasis should be placed, firstly, on the importance of investigating the changes that computational-intensive technologies are bringing to society, starting by reflecting on our own individual lives. Secondly, on questioning whether these changes are desirable or not, and, most importantly, desirable to whom. Desirability is a difficult nut to crack, Russel et al. try to explain why.

Q4: How can one ensure that there is a universal catalog of ethical behavior in artificial intelligence?

Philosophically, this assumes the possibility (and desirability?) of Universal Ethics to be used by machines.  Ethics are codified principles of what a society, organisation, or any other human constituency considers right or wrong;  behaviour is situated, contextual, and salient. Formalised Universal Ethics  do not guarantee ethical behaviour because it is context-dependent, particular,  and volatile.

Technically, we can improve the transparency and externalization of machine reasoning. For example,  research in  autonomous systems  is looking into externalizing the reasoning underpinning their behavior, in this paper, they describe their technical challenges.

Q5: Do man and machine merge?

Man and machine have long merged, the biggest merge is with the Internet, to which we are constantly and collectively connected. Individually, we also have pace makers, defibrillators, insulin pumps – complexity and scale will increase, but fundamentally the merge has already happened. Cybernetics, is about technology-driven  systems  control.  I have seen ‘dying’  ravaged by a simple pacemaker,  what could the implications be – for both the living and dying – of intelligence augmentation ?

Q6. What are the future challenges in coping with artificial intelligence and transhumanism?

Firstly, the intelligent machines of which we speak, need power,  energy, ‘food’. How will they be fed? Who will feed them? Bio-fuel crops already compete with human foodstuff production, and predictions indicate that communication industry is to consume more than 20% of world electricity by 2020.

Secondly, much focus is placed on human / machine competitiveness in the job market.  I’d also keep a closer eye on the roles that humans have and should have in society,  how those may get eroded (e.g. the joy and opportunities to exercise creativity and problem solving, care for children, care for the elderly).

These are roles that, I’d argue, define the very essence of being human. Is trans-humanism really what most of us want for our children? Is that what our older selves want?

Q7: Have we arrived in the first phase of transhumanism?

There is certainly an increased desire for trans-humanism, and where there is a will, there is a way. Human history has been shaped by the desire and reverence for ‘entities’ that transcend us. When such entities cannot be found, we imagine, evoke, and, eventually build them.

Q8: is it time that, alongside the IT industry, more and more humanities scientists are involved in the questions of the technological future?

Humanities have been for long involved in these questions. Historians and philosophers have been working on pattern recognition for centuries, and noted that at times it works and other times it doesn’t.

“Fear sells, and articles using out-of-context quotes to proclaim imminent doom can generate more clicks than nuanced and balanced ones.” {AI Q&As}. Media must play a major role in having a mature and informed conversation on this topic. This blog post was designed as  a base for conversation with the media.

I work at the intersection of human computer interaction (HCI)  and  software engineering (SE).  My research focuses on human values in computing, particularly values in software production, but not specifically in AI.

My expertise is in applied digital innovation (i.e.  in health, environment, social change). I  examine the role and impact of digital innovation on society (and vice-versa), often through rapidly prototyped technologies.  I have also put some narrative about my background below to furthercontextualize my answers.

I did Philosophy and Social Psychology as my first degree/masters in Italy (Universita’ Cattolica, Milano). Two weeks after my Viva,  I left Italy for Ireland to learn English. I only planned to stay for three months. A year after I  was awarded a  place on a MSc in Multimedia Systems Design, at the Engineering Department of Trinity College Dublin, Ireland; after that I was offered the PhD at the Computer Science Department, University College, Dublin.

My PhD was in a branch of AI (Case Based Reasoning); it was 15 years ago. Immediately after my PhD I left academia and the field precisely because I felt uncomfortable with the research domain and its applications (i. e. user profiling for commercial purposes). After that, I worked as a project manager for a  EU agency. The focus was on peace building and reconciliation through technology and economy development of EU crossborder regions.

Fast forward several year, and I am back in academia as a lecturer in computer sceince. Underpinning my research,  is a passion for understanding  the interplay between human values and computing. This comes from years of working on digital innovation research partnerships with vulnerable parts of our  society.

FOOTNOTE: Are we there yet?

**maybe we are, but have so far failed to recognize it as a form of ‘super-intelligence’ e.g. the internet-scale cyber physical system we live in is indeed powered by distributed  (hybrid) collective intelligence.